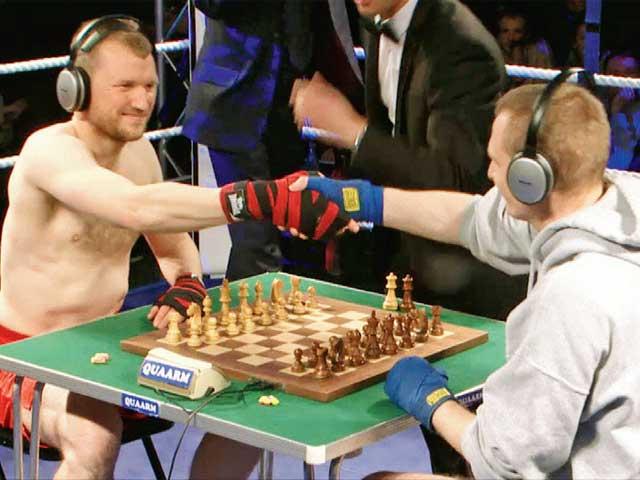 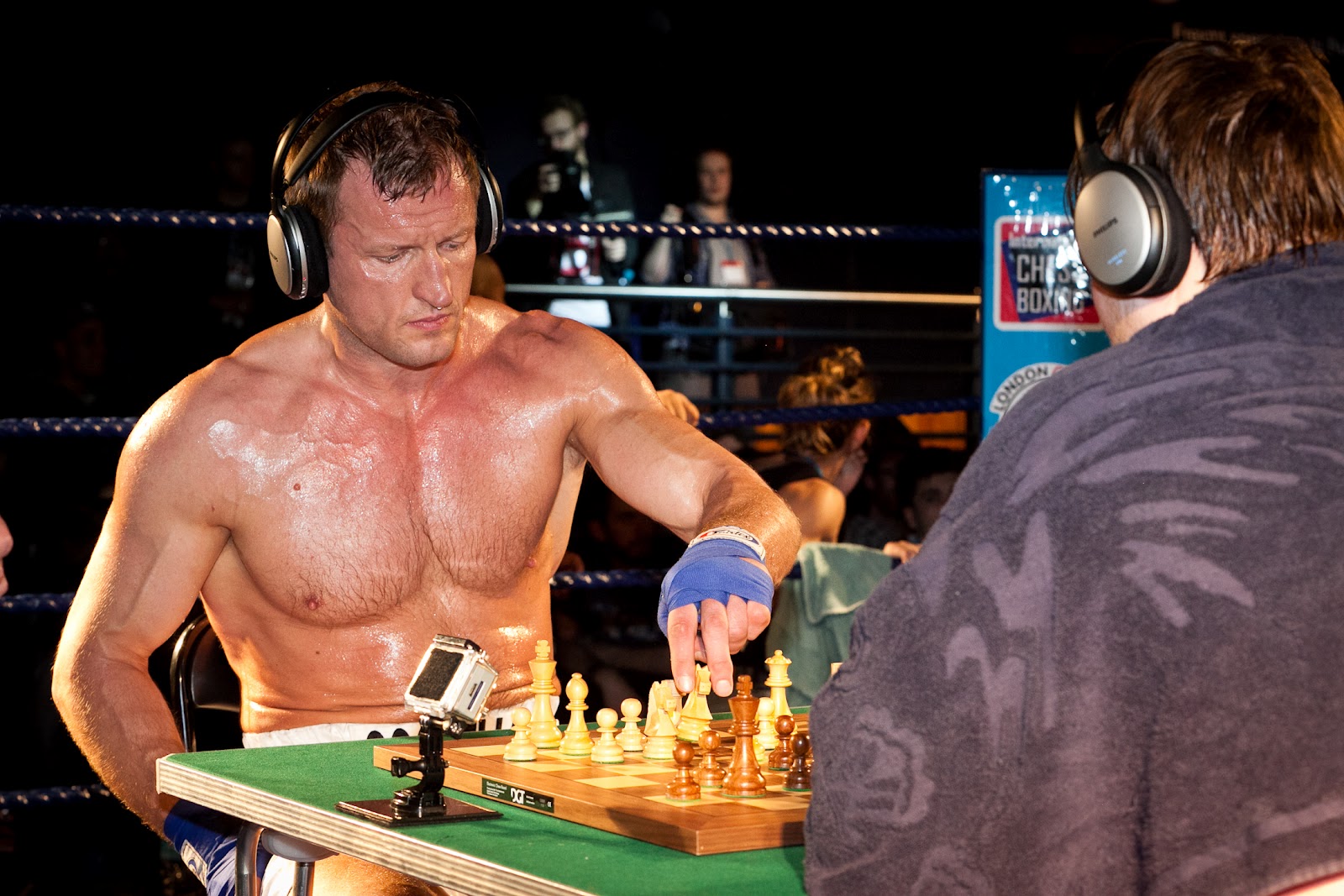 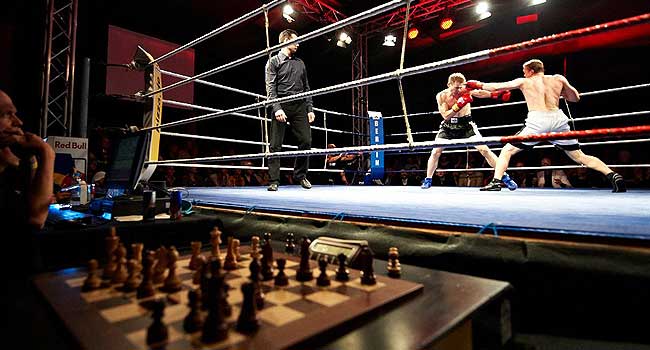 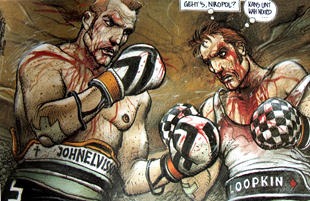 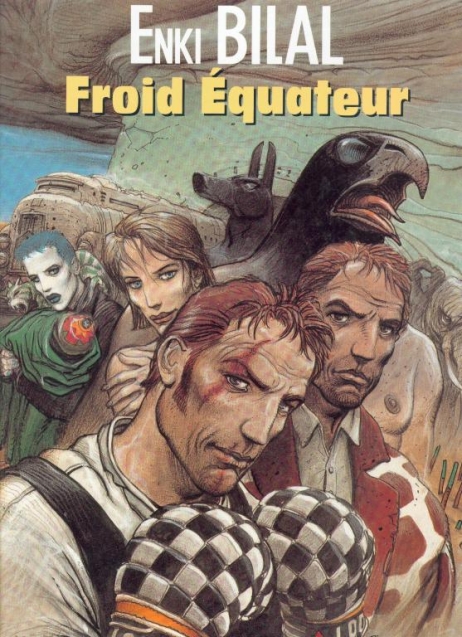 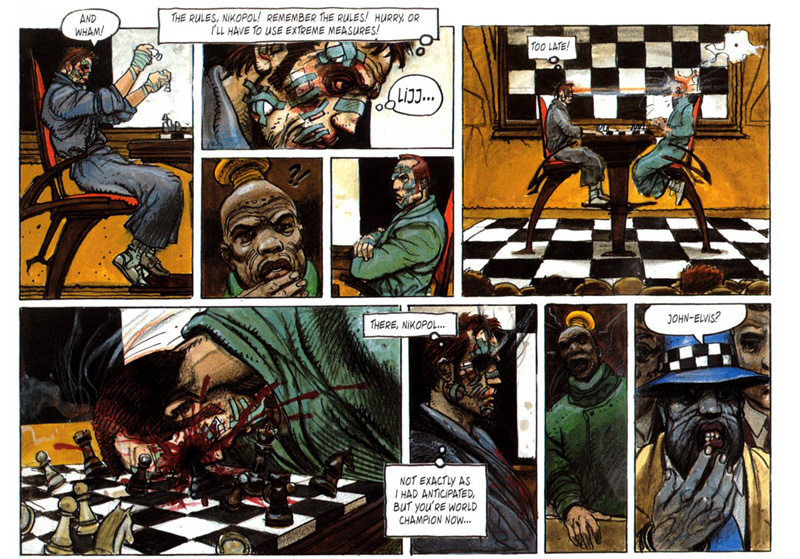 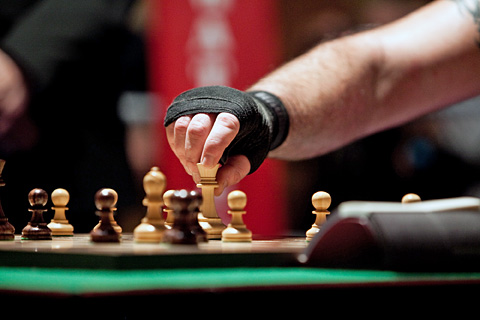 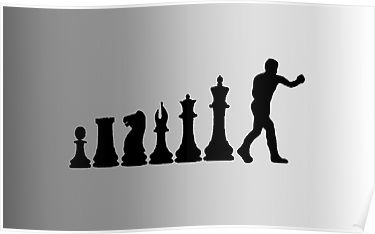 Chessboxing is a hybrid sport which combines boxing with chess in alternating rounds. Several chessboxing events have taken place around the world including in Iceland and Siberia although in recent years the UK has emerged as the most important centre for chessboxing. London has staged ten international tournaments since 2008. The sport began when Dutch artist Iepe Rubingh, inspired by fictional depictions by French comic book artist and filmmaker Enki Bilal, organized actual bouts. Chess boxing is now growing in popularity. [1] Participants must be both skilled boxers and chess players, as a match may be won either way.

[Top page]
A match consists of up to eleven alternating rounds of boxing and chess. The match begins with a four-minute chess round. This is followed by two minutes of boxing, with rounds of chess and boxing alternating until the end. [1] There is a one minute break between rounds. Speed chess is used, a form in which each player has a total of only twelve minutes for the whole game.

Competitors may win by a knockout, achieving a checkmate, by the judges’ decision, or if their opponent’s twelve minutes of chess time is exceeded. [1] If a competitor fails to make a move during the chess round, he is issued a warning and he must move within the next 10 seconds. [2] Repeated warnings may result in a disqualification. The players put on headphones during the chess portion so that they do not hear any shouted assistance from the audience or the live chess commentary. If the chess game reaches a stalemate, the scores from the boxing rounds are used to determine the winner. If the boxing score is also a tie, the player with the black pieces wins. [3]

[Top page]
The hybrid sport was envisioned in 1992 by cartoonist Enki Bilal, and chess boxing was featured in his graphic novel Froid Équateur. [1] Iepe Rubingh brought the concept to life, fighting under the name « Iepe the Joker ». [4] Rubingh felt the method described in the book, a boxing match followed by a chess match, was impractical. He instead decided on alternating rounds of chess and boxing. [5]

A similar concept was featured in the 1991 Finnish film Uuno Turhapuro—herra Helsingin herra, where the hero plays blindfold chess against one person using a hands-free telephone headset while boxing another person. It is not known if Bilal was aware of the movie. There was also a 1979 movie by director Joseph Kuo called  » Ninja Checkmate »; the English-dubbed USA version was known as the « Mystery of Chess Boxing ». It does not feature chess boxing, but it is probably the inspiration for the Wu-Tang Clan song « Da Mystery of Chessboxin' » on their first album Enter the Wu-Tang (36 Chambers) (1993). Wu-Tang Clan producer RZA is a fan and advocate of the sport. [1]

The sport is governed by the World Chess Boxing Organisation (WCBO), whose motto is « Fighting is done in the ring and wars are waged on the board. » The first world championship was held in Amsterdam in 2003 and was won by Iepe Rubingh. [6] The First European Chess Boxing Championship took place in Berlin on October 1, 2005. Tihomir Atanassov Dovramadjiev of Bulgaria defeated Andreas « D » Schneider of Germany, who conceded in the seventh (chess) round.

On April 21, 2006, 400 spectators paid to watch two chess boxing matches in the Gloria Theatre, Cologne. Zoran « the Priest » Mijatovic opened with the Queen’s Gambit. Zoran’s opponent, a 37-year old former UN Peacekeeper named Frank « Anti Terror » Stoldt, was well prepared and dominated in both the chess board and the boxing rounds. [7] In the seventh round (chess) Mijatovic realized he was three moves away from being checkmated and resigned. [7] [8]

In July 2008 in Berlin, a 19-year old Russian mathematics student Nikolai Sazhin won the « World Champion » title in chess boxing by defeating Frank Stoldt. [10] [11] [12] Stoldt resigned in the 5th round (chess) after losing his queen. [11]

[Top page]
November 28, 2009 saw the light heavyweight world championship bout between chess boxers Nikolay « The Chairman » Sazhin and Leo « Granit » Kraft, at the Ivan Yargin Palace of Sport in Krasnoyarsk, Siberia, before a crowd of 2000. Sazhin, a native of Krasnoyarsk, had previous amateur boxing experience, having fought in 95 previous bouts (winning 85), and possessed a chess Elo rating of 2005; however, he had recently suffered an injury to his knee. His opponent, Kraft, was four years younger (at 17 years of age); he was born in Gomel, Belarus, but was representing the German Chess Boxing Organisation. Although younger, Kraft had fought in 50 amateur boxing fights (with a record of 45 wins), and had an Elo rating of 1997. [13]

The fight opened with the Gruenfeld defense, and was followed by the first boxing round, which was largely dominated by the younger Kraft. The return to the chessboard in the third round saw Kraft castling early, and the resulting play saw Kraft having to defend his king. Sazhin continued in the subsequent boxing round, taking the upper hand in the fight. However, once they returned to the chess board, Sazhin used up too much time attacking Kraft’s king. Thus by round eight Sazhin was forced to win by knockout or lose on the board. This he failed to do, and, on returning to the chess board, Sazhin resigned the match. [13]

[Top page]
World-class chess-boxers must not only be experienced boxers, but must also be at least Class A strength as chess players. [14] For example, Nikolai Sazhin has an Elo rating of around 1900, roughly corresponding to high Class A or low expert level, while European chess boxing champion Tihomir Atanassov Dovramadjiev is a FIDE Master with a rating over 2300 and has won multiple chess competitions. [/lang_en]